The Dark Heart of Skyrim adventure will conclude with the release of the Markarth zone DLC. The content is set to drop this November for all currently available platforms.

END_OF_DOCUMENT_TOKEN_TO_BE_REPLACED

The Elder Scrolls Online Update 27 and the Stonethorn DLC will be launching on consoles on consoles on September 1st after having arrived on PC, Stadia, and Mac on August 24th, 2020. Here’s what to expect.

END_OF_DOCUMENT_TOKEN_TO_BE_REPLACED

The Elder Scrolls Online: Greymoor expansion brings the famed MMO into the realm of Western Skyrim in its latest release, visiting familiar locales from the franchise and gives a deeper look into the history of the lands as they wrought with turmoil and a mysterious enemy that sought to destroy everything.

END_OF_DOCUMENT_TOKEN_TO_BE_REPLACED 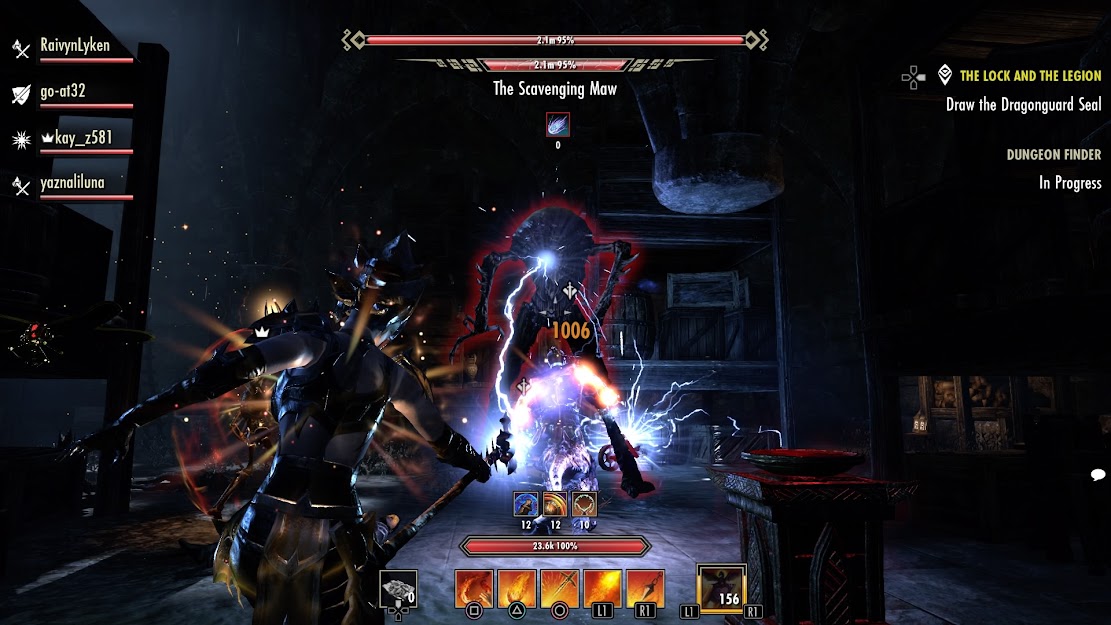 The Elder Scrolls Online’s Wrathstone DLC is here and it ushers in the Season of the Dragons as we prepare for the upcoming Elsweyr expansion. Here are our thoughts regarding the newly released DLC pack.

END_OF_DOCUMENT_TOKEN_TO_BE_REPLACED

As the road to the next The Elder Scrolls Online begins, Bethesda has confirmed that our first stop will be two new four-player dungeons as the Season of the Dragon begins.

END_OF_DOCUMENT_TOKEN_TO_BE_REPLACED

Wolfhunter and Murkmire chapters will be the first chapters to launch for The Elder Scrolls Online since the release of the latest expansion by the name of Summerset. Both will be launching later this year.

END_OF_DOCUMENT_TOKEN_TO_BE_REPLACED

Updates are always something we look forward to when it comes to our games. The Elder Scrolls Online has received the one update we’ve been waiting about since QuakeCon 2016. This update drastically changes the game and allows players to once more experience the world of Tamriel in a new way as the free update is now available for all players.

The new update changes the game title to One Tamriel, which allows players to have an unforeseen freedom in this title. With the game having a rather large world to explore, fans can now find themselves once more playing together, and conversing in this new large scale world that level-scales to the player. This means that players can now go anywhere, with anyone, at any time from the moment they leave the games tutorial no matter what Alliance players serve under.

However, in retrospect, this does change when it comes to PvP, which will put players in a restricted sense once more. However, doing quests, dungeons, trials, and more does not restrict players based on faction.

Check out some of the patch notes for more information:

New players can get the recently released The Elder Scrolls Online: Gold Edition, which includes the main game as well as all four major DLC Game Packs — Imperial City, Orsinium, Thieves Guild, and Dark Brotherhood – for only $59.99 by visitinghttp://www.elderscrollsonline.com/en-us/joinus.

ONE TAMRIEL | TRIP OF A LIFETIME GIVEAWAY

Just a reminder, the Trip of a Lifetime giveaway is currently running, celebrating the freedom of exploration in One Tamriel by awarding five once-in-a-lifetime grand prize trips to exotic locations across the world inspired by iconic in-game locations. And since One Tamriel is also all about playing together, each prize package is a trip for two, including meals, accommodations, and incredible excursions led by local guides and experts.

Grand Prize Destinations – Winners Choose One of the Five:

In addition, 1,000 lucky Runners-Up will receive 1,000 Crowns each for use in the in-game Crown Store.

Entering is easy – simply jump online and play The Elder Scrolls Online any time between Oct 5 and Dec 16, 2016 and then head online to register to win at www.elderscrollsonline.com/tripofalifetime. Entering is available without purchase by visiting the web site and mailing in a postcard as directed.

Are you ready to explore the world of Tamriel and possibly have a chance to go across iconic locales that inspired the games?

Adventurer’s are you ready to once more take to Tamriel? If so Bethesda Softworks has released a game just for you! To those who have not had a chance to adventure into The Elder Scrolls: Gold Edition for Xbox One, PlayStation 4, and PC. This newest iteration of this game comes with a reason to pick it up for fans of the series. For adventurers are ready to take off across the frozen lands of Skyrim, to the deserts of Daggerfall, only to ake to the Gold Coast to see the oceanic waters.

For players that haven’t downloaded the DLC, this version comes with all content up to date as well as the Guilds and Glory content, but also finds itself available for 59.99 USD starting now. This includes the hundreds of hours of content, the new quests, abilities, and even the new regions including Orsinium and the Imperial City. The DLC includes the Imperial City, Dark Brotherhood, Thieves Guild, Orsinium, and many more for you to enjoy. For players looking to upgrade? You can grab this content now through the in-game store.

If you’ve been waiting to become a true assassin that wants to stalk through the shadows of Tamriel, your wait is almost over. Starting May 31st on PC/Mac and June 14th for Xbox One and PS4 owners will be able to access the Dark Brotherhood DLC/Expansion for 2,000 crowns via the ESO Crown Store or players can sign-up for ESO plus and access it for free through their membership.

With the Dark Brotherhood, no one will be safe as players join their ranks. This newest expansion/DLC game pack will allow the most infamous guild of assassin’s to once more turn to the Gold Coast, a zone that has yet to be seen since the relese of TES:IV Oblivion. With this release players will be able to access the exclusive passive skill-line that will allow players to defend the Brotherhood as well as take on mysterious foes for hours in an entirely new storyline. As players do, they will be able to prove their skills as deadly warriors, who will take on certain repeatable assassinations quests, and much more. Seeping from every crease of its world, Tamriel will run red as blood will flow with the Dark Brotherhood emerging from the shadows.

A Covenant of Blood and Shadows

Join the merciless Dark Brotherhood of the Gold Coast, prowling in the shadows cast by the two great powers of the region. Though at the height of their power, the Dark Brotherhood faces a grave threat in the form of a mysterious black-armored warrior capable of bringing down their best agents. Venture forth for another exciting chapter of The Elder Scrolls Online as you carve a bloody swath across Tamriel in the name of the Dark Brotherhood!

The westernmost region of Cyrodiil, the Gold Coast, was last seen by Elder Scrolls players in The Elder Scrolls IV: Oblivion. Come explore the cities of Anvil and Kvatch during the Interregnum, when the region is awash in intrigue and deadly conspiracies!

Sometimes the best way to deal with a troublesome person is permanent removal. As a Dark Brotherhood assassin, you’ll be tasked to fill that need. From simple assassination contracts to killing sprees on the blood-soaked streets of Tamriel’s sprawling cities, carve your path into the good graces of the Dark Brotherhood. The truly skilled may engage in special missions at the behest of their dark masters and fulfill a Black Sacrament, slaying a victim named by the Night Mother herself.

This all-new skill line relates to murdering citizens and allowing the Shadows of Sithis to protect you from suffering consequences. Because those deaths were sanctioned by Sithis, you are the hand of the Void; you are the embodiment of death itself. The rules of Justice are for those bound by Nirn, not those who are directed by the ideals of Sithis.

Will you have what it takes to become one of the deadliest assassin’s in all of Tamriel?

If you’ve been playing The Elder Scrolls Online: Tamriel Unlimited, you already know it’s to be cram-packed full of stuff, which will offer fans a lot to do, and offer fans not-so-much to do depending on how far in you already are. The bright side? There’s never not-so-much to-do since you know the game is always evolving.

Will you have what it takes to join their ranks? They already know what you did.