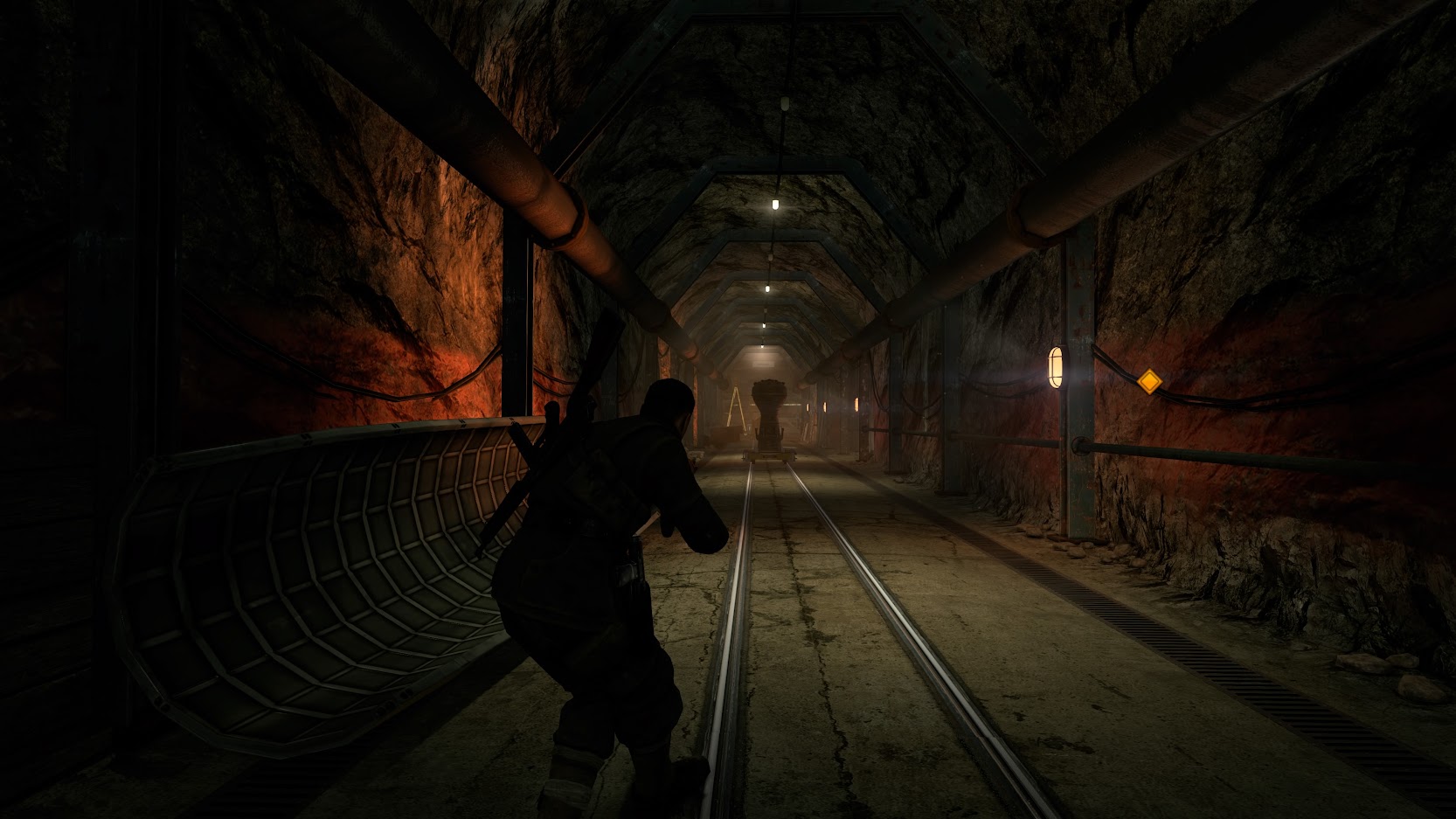 Sniper Elite V2 Remaster is a remastering of the 2012 classic, aiming for better graphics, performance, and even a ton of reasons to play through all previously released DLC, however, does it pull it off or is this a hard pass for a remaster of a 7-year-old classic? Find out starting now.

Pros:
+A noticeable improvement on the games overall graphics
+All DLC being included allows for quite a bit of replay value
+Multiplayer can be quite fun in a steady lobby where lag doesn’t become an issue

Cons:
-Infrequent crashes
-Some of the game feels as if it wasn’t remastered or touched upon at all
-Controls are still clunky as they were in the last generation.

When I first went hands-on with Sniper Elite V2 on Xbox 360 just a few short years ago, the game caught me off guard for many reasons, one of which came with the idea of how truthful it is to a sniper simulator, at least with bullet drop, and physics that come into play. I remembered the first time I’d pulled the trigger, watching the bullet fire, and nail a guy through the collarbone, watching a slow-mo snippet where the game gave off gruesome detail at the damage I had dealt.

Years later, here I am, doing that exact same thing once again, puncturing vital organs, breaking bones, and taking out enemies from unimaginable distances without much hesitation. I’m a one-man army facing down against more than several dozen Nazi’s, picking them off one by one, and I  have even set a few traps for those that attempt to catch me off guard while scoped in on an enemy.

The one thing I can admit – it’s still fun, but sadly, not much has changed. It’s just the classic game I’d experienced once before, each level being as relevant now as it was then, but with only a few major tweaks that really stick out when playing the game to its fullest. The biggest being the graphics, the second a few bug fixes, and three is the performance. Besides that, things still feel as they were all those years ago.

So let’s roll up our sleeves, let’s brush off our knees, and get down to business. 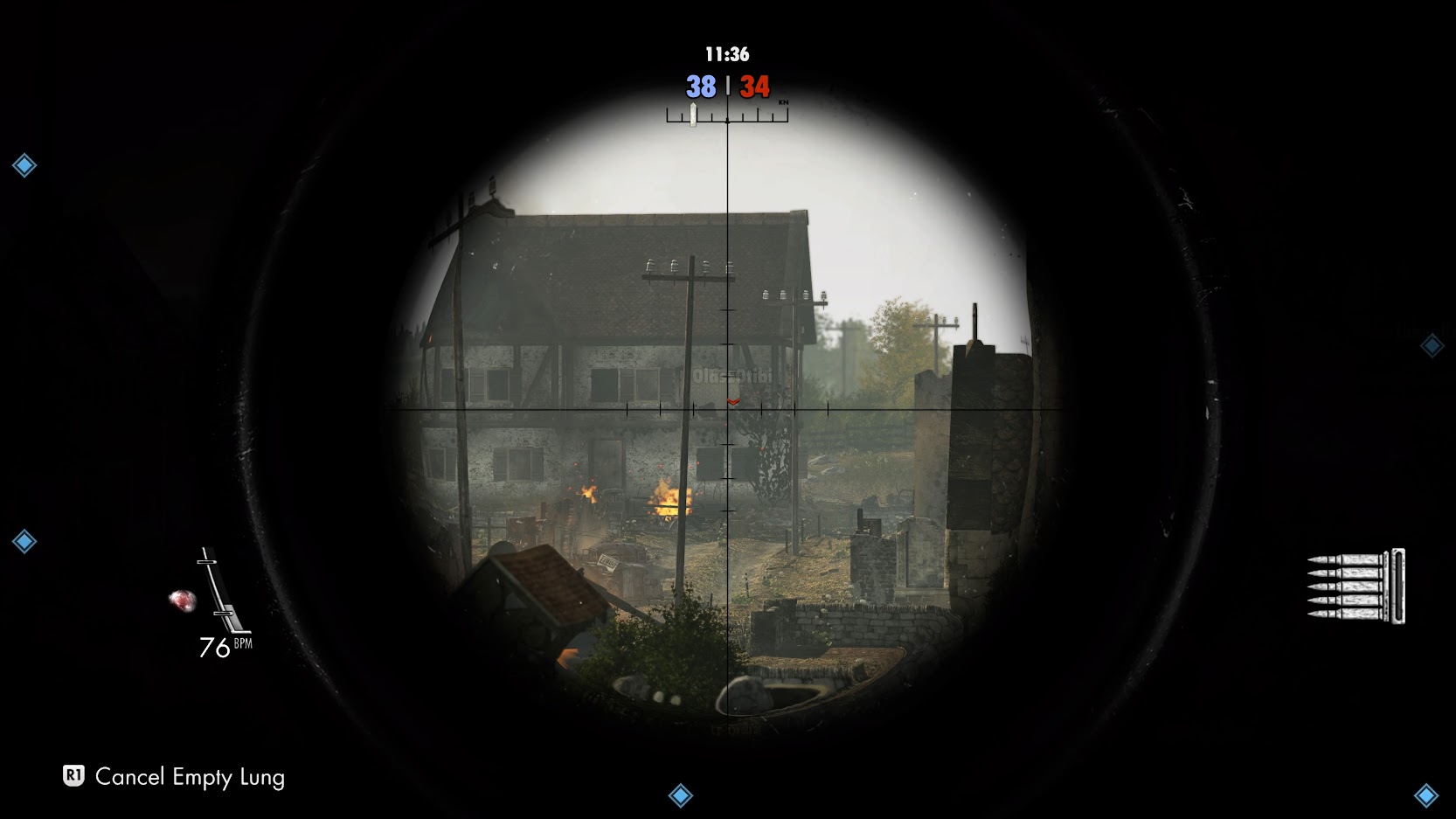 Rebellion still does what they do best – Sniper games

Rebellion, for years, has continued to perfect how physics engines and even sniper games should play. Their Sniper Elite series has few that come close to what they have to offer outside of ARMA and Sniper Ghost Warrior. Even with that knowledge, that’s not saying a lot, Rebellion time and time again – has continued doing what they do best.

For years, they’ve been great at creating memorable sniper games, but even then, they harken back to many things we love about games like 007: GoldenEye and Perfect Dark, but with physics included. You still go into missions with a set goal in mind, many of the level designs seem inspired by what GoldenEye and Perfect Dark had perfected back in the early to mid-1990s.

Your mission is to take out as many critical targets as you can, limiting the reach, the power, and the capability that the Nazi’s have. This means taking out generals, informants, and even an installation base for their V-2 rockets, crippling the reach they had in the war. Doin gso, you’ll find that every mission, which on average last between fifteen and twenty minutes, not long, but just long enough to feel that pacing was taken into consideration during the development of the game.

However, at times, it feels the missions mean absolutely nothing, it almost feels like the further you go, the objectives you’d previously completed impacted the war very little. None-the-less, Rebellion still makes your adventure as an elite sniper fun, exciting, and quite enjoyable as you progress.

With time, you’ll find that your shots are more precise, your need to let Karl Fairburne catch his breath is even less, and that you’re taking shots from longer ranges than you did when you first began. You’ll find that timing your shots with the background noise has become impeccable and you’ve somehow managed to master the art of stealth combat and collateral damage. 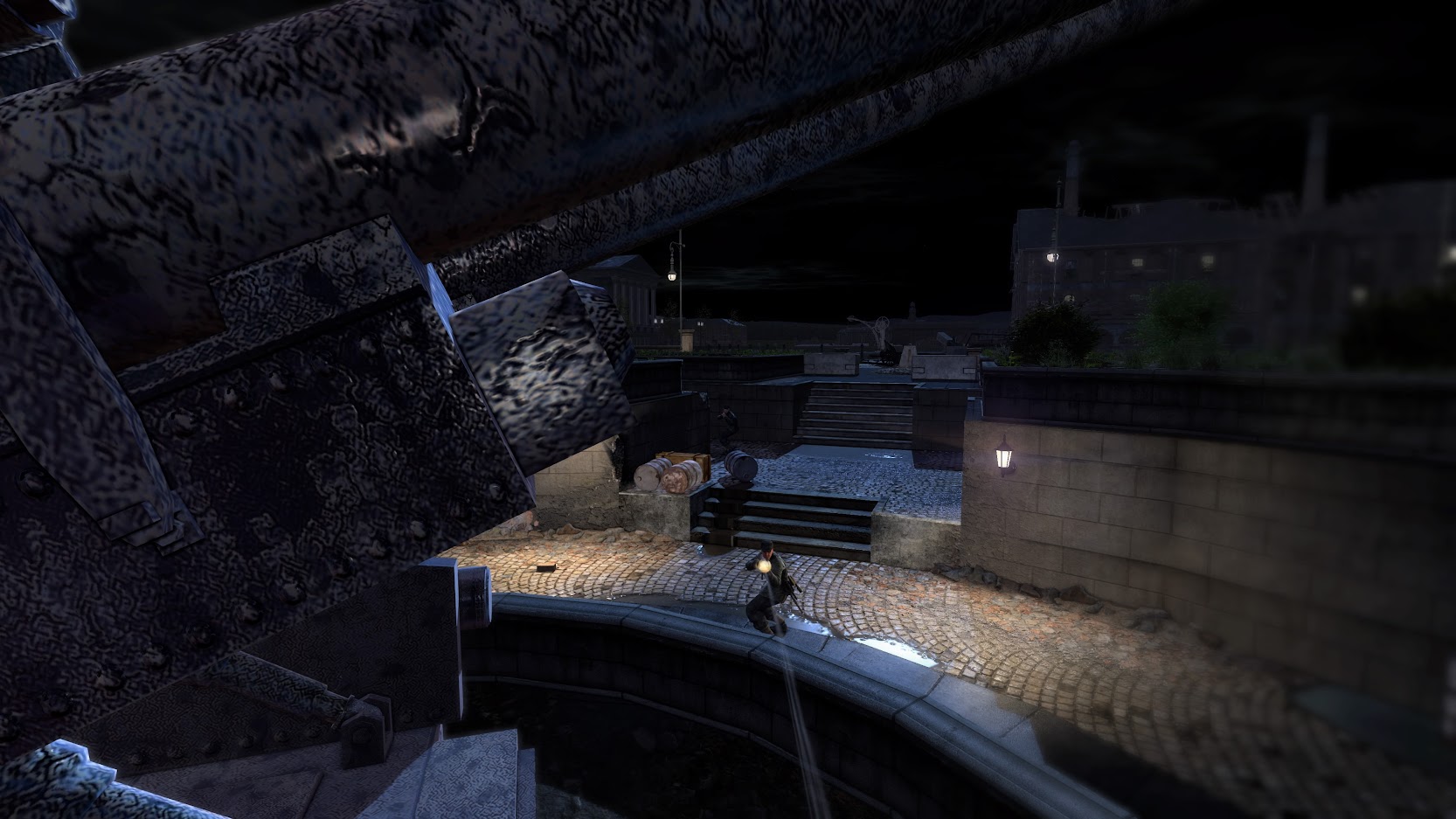 One of the most important features of this game, even during its initial launch back in 2012, remain as relevant now, as it did back then. Sound design itself is absolutely important, and because of that, this part of the game could have been a make or break deal when remastering one such game.

Your dependence on background sound, the sounds of war at that, play an important part in how you will approach every situation. The sound of gunfire in the distance, a bit of radio chatter in a base, and even the sounds of cannons in the distance will help mark when you can and when you can’t fire a single shot. Those moments are the choice between life and death as they will cover your tracks, mask your gunshots, and even help you pace out how you approach each and every scenario.

Sound, again, is crucial, which means Rebellion didn’t cut any corners in their sound design by any means necessary. Rather, they kept it all at the forefront of every scenario that will unfold, giving players a chance to approach each and every mission to their beck and whim. It’s actually nice, especially when missions begin to hit the 40-45 minute ark later in the game, allowing you to explore their sandbox-like offerings.

Every shot, every crack of your sniper rifle when a bullet hits an enemies skull, can determine life or death for yourself. Enemies aren’t shy about using sound to their advantage. Let alone do they listen to your gunfire, you can listen for theirs, you can listen for tactical information that may help you maneuver through each every mission.

Trust me when I say this, you’ll spend quite a bit more time in the Kill Tally mode, a mode that will allow you to fight against wave after wave of enemy, which allows you to see just how long you can go without being taken out by the A.I itself. 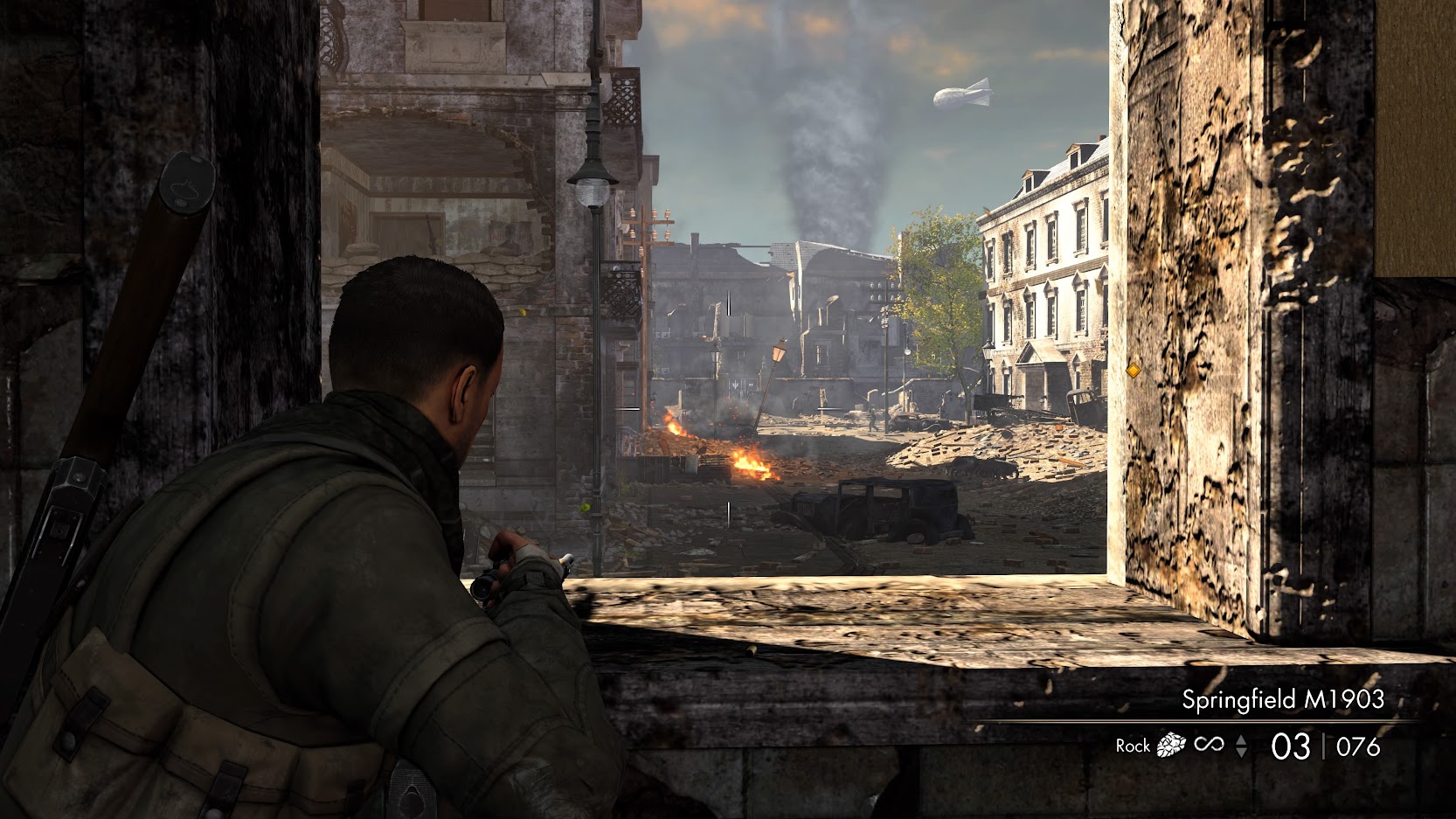 The visual presentation in the remaster is actually quite nice, but at times, dated

One of the drawbacks of remastering games, without a complete and total overhaul, is that there will be drawbacks from doing what Rebellion has. The character, Karl, has been slightly altered, giving him a darker skin tone, slightly different hair, and even a few minor changes to objects in the game.

Things such as reflections have been slightly altered, even removed from some objects such as tanks and cars. Destroyed vehicles, even, may have seen removed graphical effects, taking away from the overall appeal from a remaster versus an HD remake. Truth be told, there are some overall improvements that come as a well-deserved feature.

We actually get to see dynamic shadows/lighting, particle effects, god ray effects, and even sunshafts come to life, giving the game a more immersive experience by bringing the game to life in ways that was previously impossible with the last iteration of Sniper Elite V2. Draw distances have been increased, allowing players to see sharper projections than they did before.

Visually, fire and explosions have been enhanced, allowing for those features to stand out from Sniper Elite V2 Remastered’s older sibling. Unfortunately, even now, some textures and areas of the game feel flat, still needing improvement within the game, which could have been amazingly done by adding in some form of background stimuli or graphical effect to give a deeper sense of immersion in an on-going war. 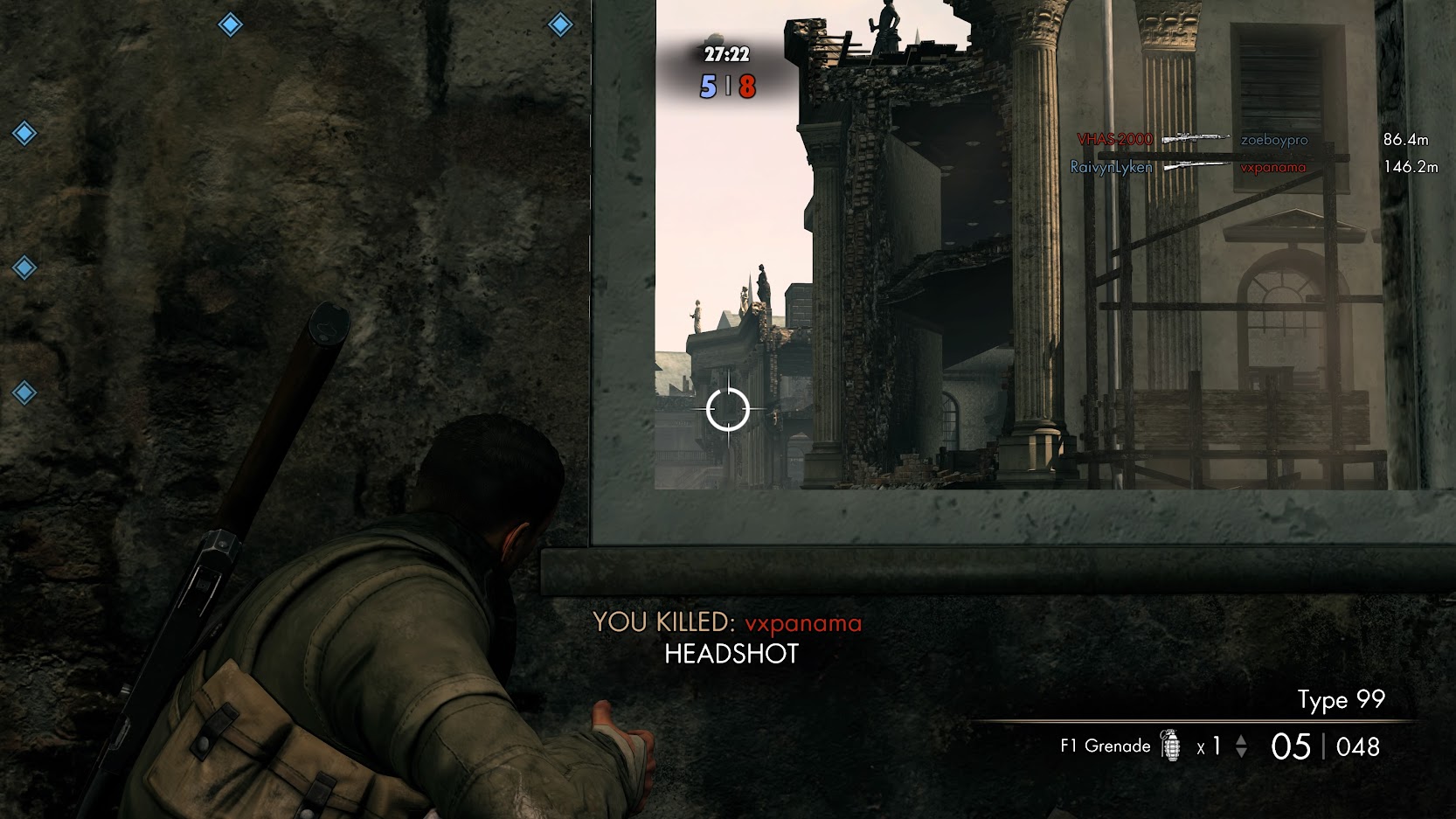 Performance has seen a nice little enhancement, but netcode remains an issue

One of the things I do love about a great remaster is the fact that performance bumps aren’t uncommon. That can be said for Sniper Elite V2 Remaster. It’s not an exception from this rule, and in fact, it’s running steadily at 60fps on a PlayStation 4 Pro at 1080p with a 7200RPM 1TB HDD. Load times are few and while they do exist, they aren’t nearly as long as the ones we experienced in Anthem or Borderlands: Game of the Year Edition on PlayStation 4.

Rebellion once more shows how a remastered title should be done, which is to eliminate past problems and nuance them with nice little fixes. However, overall, the tweaks are few and far between. Online, netcode remains a problem as players will, for the most part, lag out if their connections aren’t that great, which can be a problem for a game heavily reliant on the responsiveness of both its online and offline experiences.

Even then, guns are more responsive than ever, moving about the stages will present the game with little-to-no pop-in animations or elements of the game. Unfortunately, I have seen minor crashes when too much goes on with the game, leading to a complete game crash and a required start-over of my current mission.

With only a few of them happening every couple of hours, sometimes only once a session, it was still an ordeal I had to face down and work my way through. While unfortunate, it does exist, it’s just something to expect until a patch gets deployed. 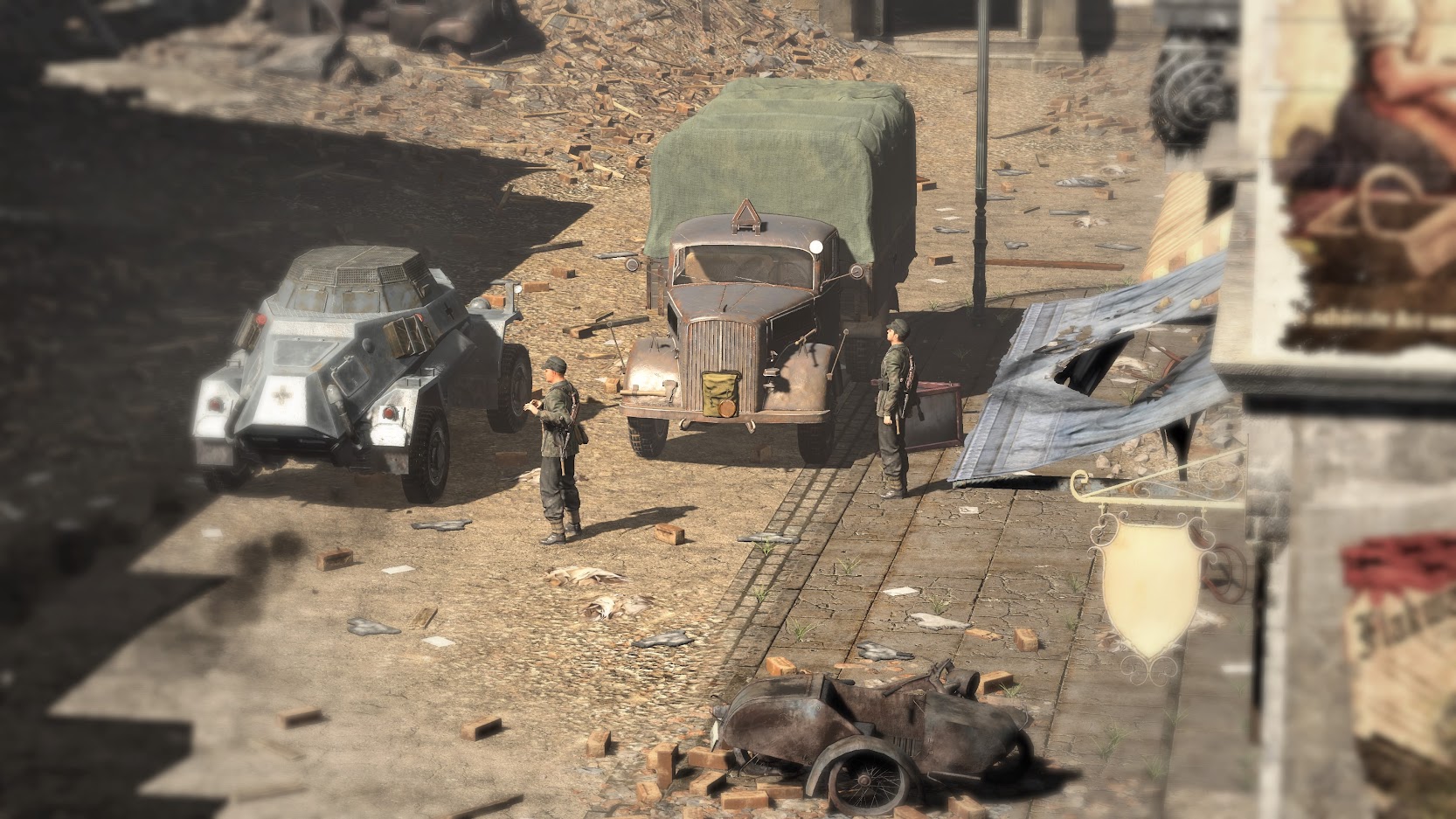 While it’s unfortunate that Sniper Elite V2 Remastered does face a few technical issues, it doesn’t mean the game isn’t fun, and it doesn’t mean that it isn’t a game you can’t enjoy. Even with minor improvements to its graphics, performance, and a rather large amount of extra content to enjoy, there’s a lot of fun to be had with Sniper Elite V2 Remastered, but just note, this also means that you’ll have to work through a few bugs and some slightly outdated design choices that were made.

Unfortunately, with a semi-dead multiplayer, very few people to play Cooperative mode with, you’ll find that your enjoyability is slim pickings, but if you can enjoy it the way you would any single player game, then Sniper Elite V2 Remastered is right up your alley and remains one of the best sniper-focused games on the market.

Our review is based upon a retail version that was provided to us by the publisher of the game. For information about our ethics policy please click here.